An impromptu trip to Santorini 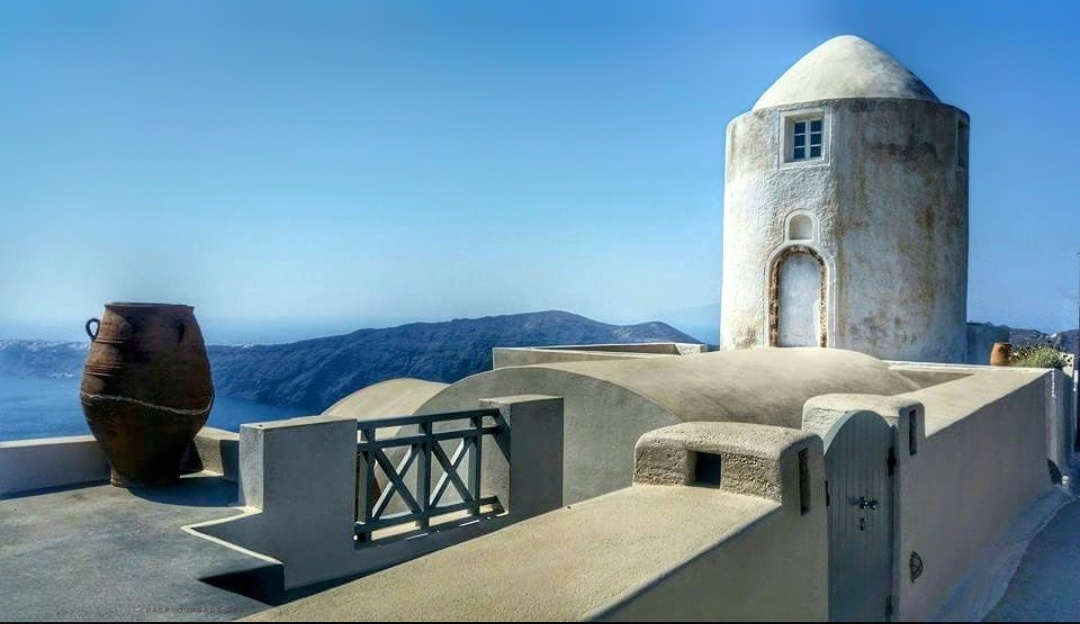 Our trip to Greece, a couple summers ago, has to be one of our more memorable family escapes. It was only a short trip and it wasn’t even supposed to happen. We were already elsewhere in Europe, when my brother and his girlfriend asked us to join them in Santorini.

Long story short, a serendipitous turn of events (precipitated by a relative’s cancelled wedding and a non-refundable house rental) created an unexpected opportunity for us to see this island. We did not need a lot of convincing. Greece had always figured high on our bucket list and traveling with my brother is always a hoot.

Our impromptu trip to Santorini

A little bit about Santorini

Santorini is a volcanic island belonging to the Cyclades Archipelago in the Aegean Sea. It sits atop a caldera that collapsed following several large volcanic eruptions.  It is a magical place. To us, it is the quintessential Greece. It is white houses with blue roofs, colourful churches and mouthwatering mediterranean cuisine. It is villagers on donkeys and fishermen with sun-hardened faces. Santorini is where history and beauty abound.

How we got to Santorini

There were no good prices for flights to Santorini on such a short notice, but we did find very reasonably priced plane tickets with Ryanair to Chania on Crete. So Crete became our side trip to our main trip to Santorini. See our post about our quick trip to Crete.

Where we stayed on Santorini

We stayed at a typical cave house in a small village of Vothonas. A cave house is exactly what its name suggests. Its efficient construction keeps the house cool during the scorching summer months. If you’re healthy and able-bodied, I suggest staying at one of these houses in a lost village as opposed to a hotel in a known town. You will get a feel for how the locals have lived here for centuries and you will not be surrounded by tourists.

Daily we crossed paths with our neighbours who often traveled on donkeys to get to where they were going. Being far from the main tourist drags is a plus for us, since we like to get lost in local life and experience what it would be like to live there, not just to visit. But it’s not for everyone as parts of these villages are not accessible by car, so if you don’t have a donkey you will need to hike to and from your house daily.

What we did on Santorini

We managed to get in a ton of exploring despite only being there for a few days. However, we feel like we only scratched the surface and we would love to come back in the future to spend more time on this enchanting island.

We explored the island as much as possible mostly on foot and occasionally by bus. My brother and his girlfriend rented a motorbike one day and explored the island that way. Since the house where we were staying was the closest to the town of Fira, we spent a good portion of our urban exploring there. There are a lot of beautiful buildings to see, like the Catholic Cathedral, the Orthodox Metropolitan Cathedral and a ton of museums.  But we also explored our lovely village of Vothonas which as you can see on these photos was amazingly picturesque.

We devoted one entire day to a hike from our village of Vothonas, through the town of Fira to our final destination which was the town of Oia. It’s best to leave in the morning to avoid the worst of the heat. Be sure to have plenty of water, sunscreen and a hat. Of course, you can always stop along the way to replenish your strength with a meal, a beer or a nap (we did all three). Along the way, you will encounter breathtaking views of white houses, the sea as far as the eye can see and perhaps a fisherman’s boat.

People flock to the town of Oia just to see the sunset. We were lucky enough to get a rooftop table at a restaurant which was a perfect venue from which to enjoy this magnificent phenomenon.

Due to its volcanic past, Santorini has very unusual beaches. We spent a day at the Agios Georgios beach near Perissa. We chose it due to its black volcanic pebbles, something we had never seen before. Just a warning, since black absorbs heat, it’s rather difficult to walk barefoot on this beach. Most people leave their flip flops very close to the water. Definitely an experience, we highly recommend it.

Lazying around on Santorini

As much as we love exploring, island life is supposed to be all about relaxing and a lack of schedules. So we spent countless hours enjoying meals together, having conversations over bottles of ouzo – all on the rooftop of our Greek cave house.

Santorini is a magical island and we will definitely return one day for a longer stay.

Hello, World! – from our traveling trio!

A little side trip to Crete

Hello! We are going to Crete next year but were thinking of going to Santorini as well. We are not sure what is more cost effective: taking a flight or a ferry. Can you advise?

That’s a great question, Mira. We flew from Crete to Santorini but returned to Crete on a ferry. The price was similar but of course the time was much faster on the flight. I guess, it will depend on how much time you have and how much you value convenience.