A day in Las Palmas – a relaxing itinerary 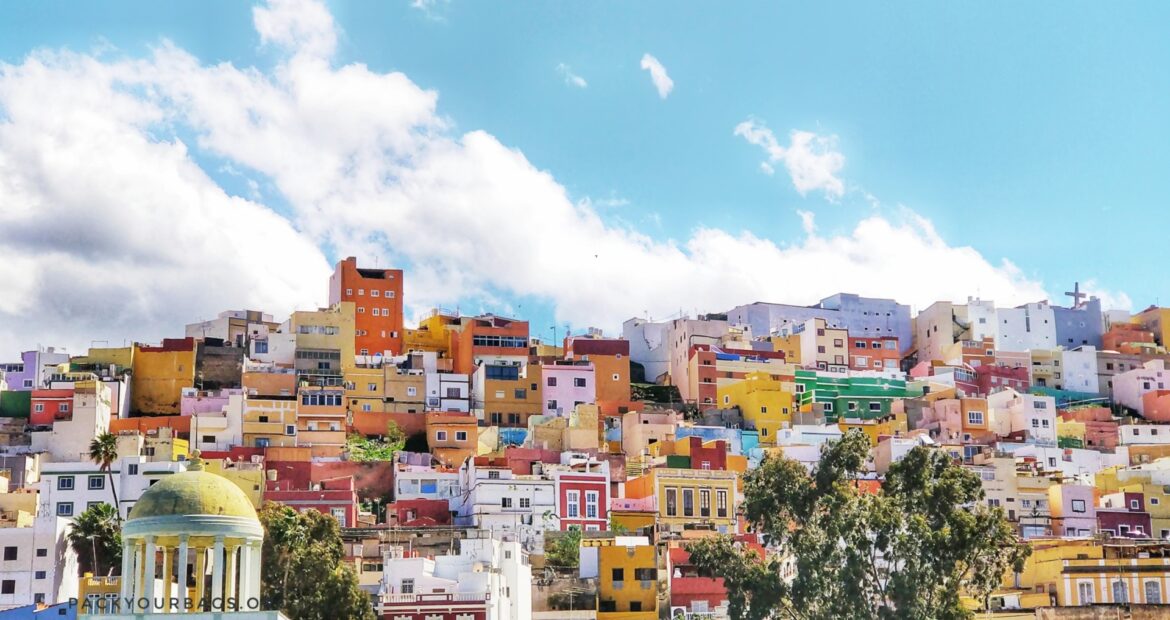 Our week on Gran Canaria was spent mostly hiking and admiring its volcanic beauty. But one day we decided to take a break from our nature treks by venturing into the capital of this island, Las Palmas de Gran Canaria.

This port city was founded in the 15th century and has had a colourful history of conquests and pirate raids. It has a pleasant and relaxed vibe. Its architecture and roots are colonial.

We’ve compiled for you a list of top things to see in Las Palmas. You can easily see these sights in one day. The first four you can visit on foot while strolling through the streets of the city. The last three are a short drive away from the historical city centre.

This church built in the 16th century, is considered to be one of the most important religious monuments on the Canary Islands.

Literally steps away from the Cathedral of Santa Ana, you can admire the governor’s house visited by Christopher Columbus in 1492 on his way to America.

Plaza de las Ranas (the Square of the Frogs)

A few minutes on foot from the cathedral, you can relax in this beautiful square. Punctuated by little restaurants and cafes and shaded by large trees, this is a perfect place to have lunch or cool off at midday.

If you want to see the most picturesque sight of Las Palmas, head towards the hill of the San Juan district. The colourful houses in this neighbourhood rival those found in Cinque Terre or Amalfi coast.

Located in the fishing district of Las Palmas, the castle is not really a castle at all. It is in fact a watch tower that had survived the attack by Sir Francis Drake in the late 16th century only to fall to the Dutch a few years later.

If you’re looking for a place away from tourists and preferred by locals, you can visit this black sand beach, located off highway GC-31 as you’re leaving Las Palmas toward the airport.

Five minutes on foot from the La Laja beach, you will find this giant statue of the son of the Greek god Poseidon. Unveiled in 2011, this giant stands about ten metres tall.

For our other Canary Islands posts, please see:

Palais Longchamp in Marseille – Two Museums in One

There must be a story behind ‘the Square of the Frogs’! I always love digging into historical trivia like that.

There is! Apparently the square commemorates the frogs that used to live in the area before the highway was built.

You will love it when you go! It’s an amazing city.

So jealous! All of these places look beautiful! I need to travel to a place like this one day. So full of color and history! Thanks for sharing!

Awww, thank you so much! We have some travel price hacking tips in some of existing blogs like this one: https://2020.packyourbags.org/canary-islands-budget/ and we will have many more coming in the future. 🙂

Gran Canaria is such a lovely island, I went there on holiday a couple of years ago. If I go back I would love to see those colourful houses in San Juan, they look awesome. Thanks for sharing your recommendations 💖 xx

Our pleasure! Yes, the houses were quite a surprise to discover. We were just walking around and there they were. Love stumbling upon beautiful things.

Las Palmas looks beautiful – especially the square of the frogs, I’d love it visit there, it looks so peaceful and tranquil! Lovely post & photos!